The ecosystem diversity of old SF

By Lauren Lewis and Elisa Baier

Before the SF peninsula was settled by Europeans and urbanized, the landscape of many diverse ecosystems — shrubby, grassy, shore, etc — allowed native coastal Californians to thrive. They lived here without developing any farming methods that we associate with traditional agriculture; instead they carefully tended and collected useful plants, foraged shellfish, and created conditions favorable for hunting. The vast majority of these ecosystems are gone now, but if you know the plants and patterns to look for, you can find each of them in small corners of the city today.

Of all the native plant communities, coastal scrub is the one that modern SF retains the most of, in Glen Canyon, parts of Mount Davidson, and the Presidio. It is categorized by California sage, coyote bush, blackberry, poison oak; shrubby, hardy plants that sheltered small game animals and provided edible berries and a lot of medicinal plant material to native people. A walk through this environment is rich with scents of the leaves’ oils and songs from the chaparral birds.

The Yelamu gained some resources from coastal scrub, but they gained substantially more calories from the large game that grazed on grasslands, so they burned the land regularly to keep it as grassland. (Unburned land eventually became colonized by shrubs rather than grasses, and turned into scrubland.) Because people managed the land this way, native prairie was the dominant plant community when settlers arrived. You can find bits of native grassland on the tops of SF’s hills now, and in the spring when the wildflowers are abundant, you can imagine the beauty of the old expansive flowered grassland with views of the water.

Along the edges of the city were extensive sand dunes, which supported a unique set of super-hardy plants tolerant of salt spray, wind, low-nutrient soil and unstable ground – dune strawberry might be the most recognizable. But because unstable ground is antithetical to development, plants such as ice plant and European beachgrass have been extensively planted for over 100 years to stabilize the dunes, and the vast majority of the habitat has been lost. 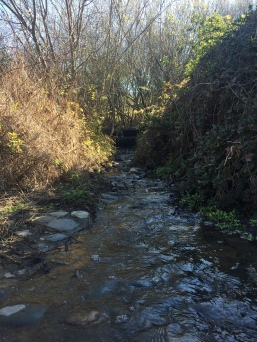 A similar explanation applies to the riparian and wetland habitats of old SF. Unsurprisingly because of the presence of water, these habitats were biologically very rich, but bay fill and culverting has resulted in just small remnants. The free flowing portion of Islais Creek in Glen Canyon Park gives a sense of what creek habitats may have been like and Heron’s Head Park resembles the marshy habitat once surrounding the peninsula on the bay’s edge.

We’re lucky that some parts of the natural world will probably be apparent in San Francisco as it grows – the steep hills, ocean and bay will likely be obvious forever. To see the more subtle parts of our natural history we’ll have to conserve what still exists and maybe attempt to reconstruct other areas, like old marshes or creeks. At Small Spot Gardens, we suspect that having access to California landscapes in San Francisco helps us connect to a bigger picture – maybe living with and learning about the old ecosystems and the people who tended them will help us understand how to individually handle an increasingly fast paced world and how to collectively approach a quickly changing climate.

One Comment on “The ecosystem diversity of old SF”